Honest Answers about the Murder of President John F. Kennedy: A New Look at the JFK Assassination Paperback – March 19, 2021

Thousands of books and articles have been written about the murder of JFK, many of which are large in volume and short on facts. Quite often, these works try to reinvent the wheel, attempting to cover every single area of the assassination, as well as many tangential and unessential points, as well. The reader is often left exhausted and confused. The sheer volume of pages, conflicting facts, and theories leaves one unsatisfied and, quite frankly, not sure exactly what did happen on 11/22/63. This book seeks to separate the wheat from the chaff. It is 55-plus years later: it is time for real, honest answers in an easy-to-read and understand format. Proof of a conspiracy; no theories; to-the-point; a perspective on the assassination for the millennial age and beyond. Based on years—decades—of primary source research and having read countless books on the subject.

Reviews
"I am impressed with your research, accuracy, and willingness to 'tell it like it is.'"
- Robert DeProspero, Secret Service agent 1965-1986 and head of President Reagan's Detail late 1981-early 1985; subject of the DVD The Man Behind The Suit
"I continue to be impressed with your research." - Lynn Meredith, Secret Service agent assigned to JFK's children
"You are, unquestionably, the main authority on the Secret Service with regard to the assassination." -Vincent Bugliosi, best-selling author of Helter Skelter and numerous other books
"Vince Palamara is a Secret Service expert."- The History Channel (2003) and Newsmax TV (2019)"No one has studied the actions of the Secret Service and the assassination more than Vince Palamara." - Actor Peter Coyote in the DVD/Blu Ray A Coup In Camelot
​"Your ground breaking and persistent work has made you the foremost authority on the role of the Secret Service during that day in November. Your work is meticulous and accurate. You are mentioned several times in my last book on the assassination called Last Word." -Mark Lane, best-selling author of Rush to Judgment and several other books
"Vince Palamara is the foremost authority on the Secret Service in the 60s. He is a personal friend of mine and a very good researcher."-Abraham Bolden, former JFK era Secret Service agent
"Vincent Palamara conducted extensive interviews with former Secret Service personnel."-Final Report of the Assassination Records Review Board (1998), pages xvii & 138, presented to President Clinton
"You know a heck of a lot about the Secret Service, maybe even more than I!"- JFK Secret Service agent Joseph PaolellaA tremendous benefit for those with a short attention span in the soundbite/social media/meme society we live in today(especially for millennials but geared for all ages). Actual proof of conspiracy in the death of President Kennedy! Proof of a conspiracy; no theories; to-the-point; a perspective on the assassination for the millennial age and beyond. Based on years--decades--of primary source research and having read countless books on the subject. An essential guide through generations of mind-numbing information to get to the heart of the matter: honest answers and a frank appraisal of the state of the case. Favorable comments about Palamara's work in both the October 2014 issue of Vanity Fair and in the 8/28/2000 edition of Publisher's Weekly

1.Hard evidence of conspiracy in the death of JFK-not just theories.2.Easy to read and to the point- not filled with hundreds of pages of padding and extraneous materials.3.Summarizes and updates everyone on the state of the case in the 21rst century with the benefit of hindsight and years of primary research.

From the Inside Flap

An all-in-one work that encompasses the case for conspiracy without missing anything of importance and offering no distractions. A straight-to-the-point work that grabs you by the throat and doesn't let go. A book that has the tremendous benefit of both decades of hindsight as well as the countless document releases courtesy of the ARRB, not to mention much primary research by the author.

From the Back Cover

I have interviewed and corresponded with the vast majority of President Kennedy's Secret Service agents (including Clint Hill and Gerald Blaine...and long before their books came out), as well as quite a few Parkland Hospital doctors and nurses, Bethesda Naval Hospital personnel, motorcade occupants, White House aides, and prominent authors/researchers on the case. 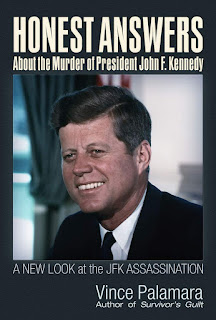 Posted by Vince Palamara at 7:59 PM No comments:

JFK: FROM PARKLAND TO BETHESDA- THE ULTIMATE KENNEDY ASSASSINATION COMPENDIUM (2015; kindle and paperback):

THE NOT-SO-SECRET SERVICE: AGENCY TALES FROM FDR TO THE KENNEDY ASSASSINATION TO THE REAGAN ERA (2017; kindle and paperback):

WHO'S WHO IN THE SECRET SERVICE: HISTORY'S MOST RENOWNED AGENTS (2018: kindle and paperback):

MY MAJOR APPEARANCE ON A COUP IN CAMELOT (DVD, BLU RAY, AND STREAMING):

I am also on the credits to this wonderful National Geographic special from 2013 called JFK: THE FINAL HOURS that still occasionally airs and is also available on DVD: 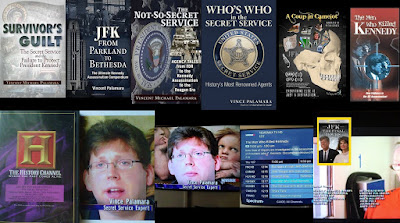 Posted by Vince Palamara at 12:13 PM No comments: 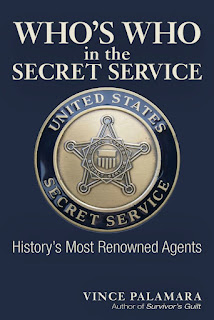 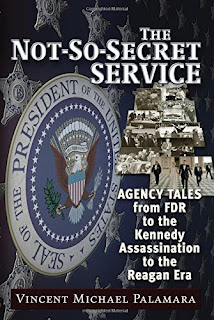 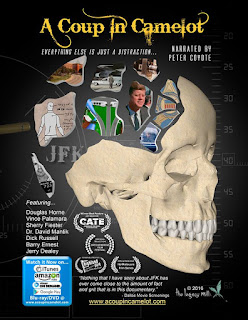 My second book JFK: FROM PARKLAND TO BETHESDA (2015):
https://www.amazon.com/JFK-Parkland-Bethesda-Assassination-Compendium/dp/1634240278/ref=tmm_pap_swatch_0?_encoding=UTF8&amp;qid=&amp;sr= 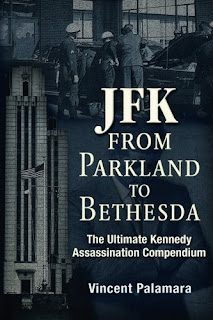 My first book SURVIVOR'S GUILT: THE SECRET SERVICE AND THE FAILURE TO PROTECT PRESIDENT KENNEDY (2013):
https://www.amazon.com/Survivors-Guilt-Service-Failure-President/dp/1937584607/ref=tmm_pap_swatch_0?_encoding=UTF8&amp;qid=&amp;sr= 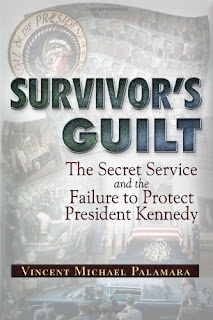 Posted by Vince Palamara at 7:27 PM No comments:

My best book, WHO'S WHO IN THE SECRET SERVICE (2018), HAS ARRIVED
Yours for only 15 dollars (including shipping and handling; USA only)! Although the official release date is 9/1/18, I received my copies today. Send me a private message and an autographed copy is yours! Over 300 pages, rare photos, and much new and interesting information! I am proud of all four, but this is my favorite of them all- quality of content/paper/photographs, new information, etc. This one covers from the McKinley thru the Trump era by detailing the top 100 (+) most renowned, interesting and famous agents. Appendix 1-4 will be sure to please researchers, while regular folk will be absorbed by these men and women who protect our presidents. Over 300 pages.
CLICK ON IMAGES TO ENLARGE 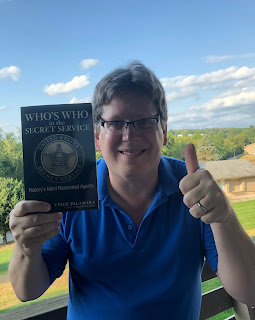 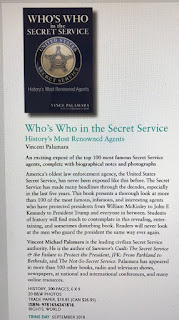 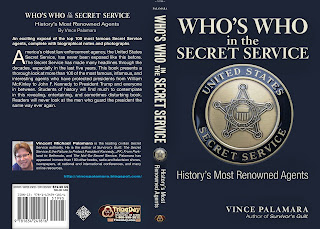 Posted by Vince Palamara at 7:37 PM No comments:

President Kennedy’s Secret Service Protection and the press coverage for...

Posted by Vince Palamara at 6:13 PM No comments:

Posted by Vince Palamara at 9:32 PM No comments:

Building rooftops were regularly guarded BEFORE the JFK assassination! Just one of the many revelations to be found in my new book THE NOT-SO-SECRET SERVICE:

Building rooftops were regularly guarded BEFORE the JFK assassination! Just one of the many revelations to be found in my new book THE NOT-SO-SECRET SERVICE: https://www.amazon.com/Not-So-Secret-Service-Agency-Kennedy-Assassination/dp/1634241207/ref=sr_1_5?s=books&ie=UTF8&qid=1477961936&sr=1-5 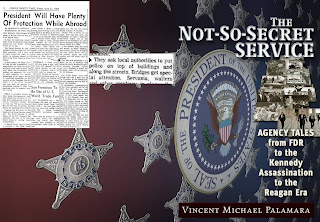 Posted by Vince Palamara at 5:14 PM No comments:

JFK: FROM PARKLAND TO BETHESDA 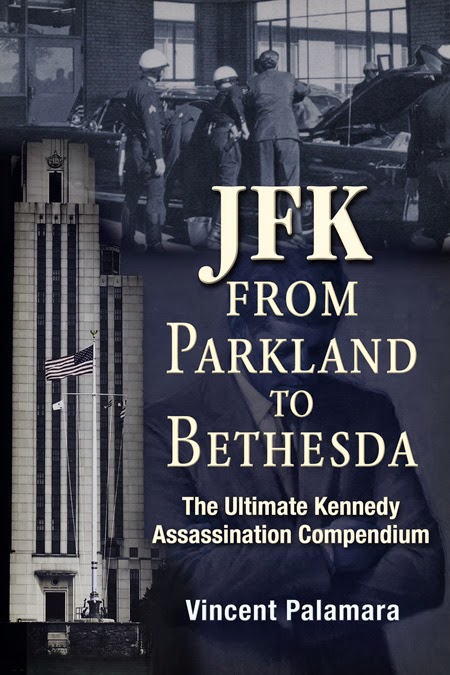 JFK: FROM PARKLAND TO BETHESDA

Vince Palamara
NOTE: My JFK-era blog does not seek to denigrate the modern Secret Service in any way, shape, or form, or even, ironically, the PRE-November 1963 protection of JFK, which was often outstanding. THIS blog focuses harsh criticism ONLY upon the events related to 11/22/63. THAT EVENT ASIDE, I AM A GREAT ADMIRER OF THE SECRET SERVICE. ---- I am regarded as THE leading civilian authority on the United States Secret Service, especially with regard to the JFK/ LBJ years (I have interviewed and corresponded with over 80 former agents and family members, a world record! The Warren Commission: 12). I have appeared on the History Channel, C-SPAN, PA Cable Access, in the ARRB's Final Report, on radio, in newspapers, in over 80 other author's books, and all over the internet. I am the author of the book Survivor's Guilt: The Secret Service & The Failure To Protect President Kennedy; PRESIDENT KENNEDY WAS A VERY NICE MAN AND, AS MANY AGENTS TOLD ME (IN WRITING AND ON TAPE), HE *NEVER* INTERFERED WITH THEIR ACTIONS! Contact Vince Palamara at vincebethel@yahoo.com